Towards a better fantasy TV show So, The Shannara Chronicles just ended and Game of Thrones is coming. Yet again, fantasy shows its weakness when it comes to the small screen.

Sci-fi has a long history of success when it comes television. Star Trek (in all its incarnations) Firefly, Battlestar Galactica (old and new) the list goes on. And these days, when geek culture is ascendant and comic book conventions have become must-see events for the cognoscenti and tastemakers of our popular culture, sci-fi’s place in the pop firmament could not be more established, at least, when it comes to TV.

But fantasy is another matter. Yes, we have Game of Thrones, but that is one drop (albeit a very large one) in a perilously empty bucket. GoT succeeds in large part because it ignores many of the conventional tropes associated with fantasy stories, It is at heart a soap opera with dragons, the Sopranos with wizards and warring houses. This derives in large part from the source material, which was revolutionary when it came out because of the way it approached characterization. George RR Martin was not all that concerned with the Big Fight To Save The World that has been the foundation for epic fantasy since the time of Tolkien. The Big Unknowable Evil in A Song of Ice and Fire are a bunch of undead ice monsters who thus far have not troubled the rest of the world beyond the Wall (and to be honest, those have always been my least favorite parts of the tale.) In the rest of his story and world, the fight is much more complex, morality very much in shades of gray. The biggest struggles take place as much within the souls of the characters as they do on the battlefield.

Which makes it tailor made for a tv season spread out across twenty or so episodes per season. The Big Bad Evil Guy and the fight to overthrow him are enough to hold a two-hour movie together, which is why the Lord of the Rings did so well as a movie. But To strength the story any further than that requires characters with real depth and the potential for change. (I’d love to see the Silmarillion made into a tv series; I’m enough of a realist to know it will never happen.)

The Shannara Chronicles was entertaining, but it didn’t really do that much. And if one looks back at the fantasy tv shows of yesteryear, there is a lot that makes one cringe. Hercules, Xena, The Beastmaster (yes, there was a Beastmaster tv show) Legend of the Seeker…the to succeed here is not that high, but few still manage to clear it.

So here is an idea. Dungeons & Dragons has now cleared the long legal morass that has tied up its film rights. The memory of the 2000 movie is fading from view – the only people who even remember the 80’s cartoon are oldsters for whom it is a campy piece of nostalgia. Why not a live action dungeons and. Dragons tv show? And better yet, base it on one of the existing adventure modules or books. White Plume Mountain should be good for a few episodes. Red Hand of Doom would provide more than the usual hack and slash. The Temple of Elemental Evil could be the basis of an entire season, maybe with the Tomb of Horrors as a follow-up. The Dragonlance Chronicles could work as a Netflix series (and banish the animated movie to the depths of perdition.) 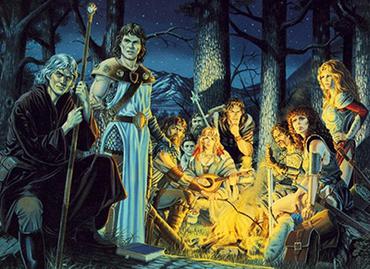 Roleplaying games about characters, the players the heroes of their own personal legends. And they do not remain static, the grow and change as the campaign progresses, they level up, they grow stronger and along the way learn some wisdom (or in my group only become crazier, but we are a happy pack of murderhobos and munchkins.) They evolve and mature…and all too often fail in truly spectacular ways. It works around the gaming table, it would work on the small screen as well.

Here’s hoping it happens! At the very least it could be worse than Legend of the Seeker…