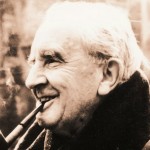 John Ronald Reuel Tolkien was born in 1892 in South Africa, moved to England when he was three and spent the bulk of his childhood in the countryside around Birmingham. Both his parents died when he was young, and his mother named a close friend of hers who was also a Catholic priest has his guardian. Upon reaching adulthood he got married, went of to fight in the First World War, was invalided out during the Battle of the Somme, went on to Oxford, academia and literary glory…for more details, consult his Wikipedia entry.
Tolkien’s impact on the fantasy genre is unquestioned and nowhere is the subversive nature of nostalgia more evident. The bucolic idyll of the Shire is the English countryside of his youth, the quiet ways of his hobbits, their suspicion of change for its own sake a quiet rebuke to the idea of Progress. The deep Catholic faith that filled his life gave him stories an epic quality, like an old medieval romance where everything was more colorful, where the flaws in even the most heroic of beings made their victories all the more greater, their failures more poignant, and even the smallest of persons could make a difference. That evil exists and must be resisted, and where even those seemingly lost to darkness (like Gollum) might in the end find salvation in the most unlikely of circumstances. And overlaying it all was this enormous mythology, a sense that the characters (and by extension the reader) were participating in a great drama whose roots lay in a legendary past that inexorably shaped the present.

Today a lot of this seems cliched, even trite. Who hasn’t read a story about a Evil Dark Lord© in his Big Tower of Bad beings hurled down by impossibly perfect heroes? Critics point to the myths and legends on which he drew upon and denounce it all as reactionary tripe. But at the time it was something that went completely against the grain. The early 20th Century belonged to the Modernists, to Hemingway, Fitzgerald, Joyce and all the rest. It was a break with the past and the old ideas, which the Great War had so completely discredited. “Sweep the whole field of art clean of all themes and subjects which have been used in the past,” as Marinetti declared in the Manifesto of Futurism. But Tolkien and his fellow Inklings wet down a different route, embarking on an act of cultural reclamation, looking to the past, to nostalgia, for answers for the problems of the present.

Old wine in new bottles…but it is old wine that tastes the best. To the march of progress, contrast it to the peaceful ways of the Shire, that exist out of time. The gleaming progress of technology has its dark reflection in the despoliation of Isengard and the bleak hell of Mordor. The power of myth and legend and how they can stand against even the most strident of ideologies, that if we remember our past and where we come from, we can reclaim the future. There is an optimism there that we do not see these days, that by looking to the better times of the past, even if they only existed in our heads, we can hope for a better tomorrow.

“If you really want to know what Middle-earth is based on, it’s my wonder and delight in the earth as it is, particularly the natural earth.” – J. R. R. Tolkien