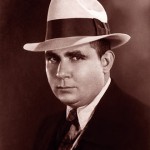 Modern fantasy fiction is a child of two fathers, and Robert E. Howard. If Tolkien helped build what we now call High Fantasy, Howard is the originator of its sister sub-genre, sword and sorcery. Both men are rightly considered the fathers of fantasy, yet it is hard to image two men who were more different from one another. Tolkien was the prototypical tweedy Oxford don, while Howard spent his life around his hometown of Cross Plains in Texas. Tolkien was a college professor who essentially wrote on the side, writing the Lord of the Rings in the company of his fellow Inklings, while Howard worked as a writer of pulp fiction. Tolkien gained worldwide renown in his lifetime and lived to a ripe old age – Howard died a suicide and his work would have been doomed to obscurity were it now for the dedicated work of August Derleth and L. Sprague De Camp (and the late, great Frank Frazetta, whose covers for the 50’s and 60’s reprints helped define the character for a new generation.)

Yet in one important sense Tolkien and Howard worked from the same foundation – a sense of nostalgia for a better time that had passed (or had never existed in the first place.) Yet this nostalgia took very different forms and led to different places. For Tolkien, the goal was to evoke a lost grandeur, the sense of a lost age, a more civilized and wondrous time, now replaced by a dirty, barbarous present. But for Howard, it was civilization that was to be lamented. He looked to a past that was rough, not refined, free of the decadence and decay that came with civilized man. In Howard’s writings, civilization is portrayed as irredeemably corrupt, a source of vice and venality, filled with soft men who lie and cheat, selling their souls and sacrificing others to dark gods for earthy power. 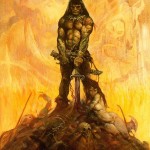 Only among the barbarian, the savage, is there strength and vigor to be found, men who are forthright because to do otherwise is to risk having your skull caved in with an ax. It was a Rousseauist view of humanity that worked from the assumption that the closer one is to a state of nature the better. His other heroes do not embark on great adventures to save the world, there are no humble hobbits or noble rangers in the Hyborian Age. Conan and Kull are men out for themselves, often hard to distinguish from the enemies they slay, who do not seek to protect the world but rather to make their way in it, without being corrupted by it. They are men who become Kings by their own hand, adventurers who overthrow old orders so that they may rule at the top, as Conan did in Aquilonia and Kull did in Valusia. They are reminiscent not of King Arthur and the Golden Age of Camelot, but of older legends like Achilles or the heroes of the old Norse sagas, for whom the attainment of personal glory was the primary goal, the surest path to immortality.

Its not hard to see why Howard’s tales took this attitude. He was born in 1906, barely sixteen years after the U.S. Census Bureau declared the frontier closed. The Texas of his childhood was a place where the Wild West was still a living memory, a place of cowtowns and boomtowns steeped in tales of gunfights, outlaws and Indian raids. The Texas oil boom of the early 20th Century was at its height, bringing with it a massive increase in crime, vice and bare-knuckle violence, the dark tide of modern civilization pouring itself over the frontier. It’s hard to make the case for the merits of civilized society in such a situation. Progress brought corruption and left despair in its wake and what it built could not be expected too last for long, it would soon collapse under its own weight.

Indeed, it is this fatalistic view of human existence that differentiates Howard’s nostalgia from Tolkien’s. The Lord of the Rings saw the restoration of an older, civilized order to its rightful place, leaving the darkness behind to live in the light. But to Howard such an order was unnatural and could not last. Civilizations were doomed to fail; no matter how high they climbed, humanity would fall back to its natural barbarous state, falling from within or overwhelmed from without by those who were uncivilized, and thus unweakened.
It is a gloomy idea, but it comes with lesson – the actions of a strong individual were all the more greater, his victories more glorious. Conan and his others heroes live for the day…the world may end tomorrow, but today we are alive. “Let me live deep while I live; let me know the rich juices of red meat and stinging wine on my palate, the hot embrace of white arms, the mad exultation of battle when the blue blades flame and crimson, and I am content… I live, I burn with life, I love, I slay, and am content.” It is a darkly romantic view of life (and there is no philosophy more dependent on nostalgia than romanticism,) defying the night even as darkness falls, seizing every moment and living them to the fullest until the final ending comes.

“Barbarism is the natural state of mankind. Civilization is unnatural. It is a whim of circumstance. And barbarism must always ultimately triumph.” RE Howard, Beyond the Black River, 1936