Review of THE MISPLACED LEGION 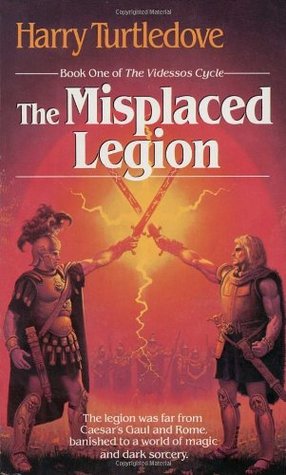 Before Harry Turtledove became obsessed with writing – and rewriting- alternative versions of the Second World War, he was a notable scholar of Byzantine history, which led him to write the Videssos series, and entertaining saga that turns away from the usual Northern Europeans-folklore influences of Tolkien and company towards a world based very closely on the Byzantine Empire. In fact, aside from the presence of magic and a few cosmetic changes, it could very much stand in for a straight-forward alternative history in which Constantinople never feel to the Turks. Which is in fact the subject of another book he wrote…but one thing at a time.

The premise behind the series goes like this: a Roman legion led by the tribune Marcus Aemilius Scaurus, fighting during Caesar’s conquest of Gaul, gets transported to an alternative world due to a mishap with a pair of swords enchanted by a powerful druid (coming along for the ride is a Gallic chieftain who was fighting on the other side…) Unable to return home, they hire on as mercenaries to the Byzantium-like Empire of Videssos. The idea of a Roman legion hiring on to serve a fantasy version of the Empire that would ultimately succeed their Empire might seem a bit ludicrous, but Turtledove makes it work with strong characters and a detailed and highly realistic setting.

Religion plays a strong role here, and in this Turtledove;s historical background shows itself strongly. The primary religion is a thinly disguised version of medieval Orthodox Christianity, which like the real-world version is beset by various heresies and schisms. The primary villain is Avshar, a former Videssian priest who switches to the worship of Skotos, the Videssian version of the Devil. A generation before the Roman legions arrival, he facilitated the conquest of a neighboring Empire, leading a nomadic horde from the steppe to overthrow the previous rulers, mirroring in many respects the Mongol conquest of Persia. The series slowly builds up over the course of several books, depicting both the external battles and internal intrigues that best the real-world Byzantine Empire, leading to the expected confrontation between light and dark.

The premise is somewhat outlandish, but the series is solid, a real and pleasant alternative to the the usual elf-and-orc style of fantasy. A good read all around.