If there is any commonality in the sate of the fantastickal these days, it would be that the old is new, retro is the new…er, new-tro would be the best way to describe it. Writers, comic books artists and filmmakers are looking back at the past for inspiration, more specifically at older genres like pulp scifi and crazed mashups of westerns and who knows what.

Consider the following…A Princess of Mars being made into a movie by Disney (renamed as John Carter?) along with no les than three comic books coming out based on the Barsoom stories. Conan is being remade (looking forward to it…hope they recycle the Poledouris soundtrack…) Cowboys and Aliens…nuff said. All well and good…enough with the angsty irony-laden crap of the last decade. Many are in the mood for some good old-fashioned pulpy fun. As much as people liked to mock the old-timey stuff, you can’t deny it was a blast to read and watch…unlike all that doomy and gloomy pretentious nonsense that came out when scifi and fantasy began to take itself waaaaay too seriously as “art….” (Sword of Truth, anyone?) 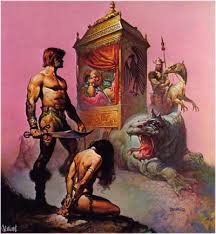 Hopefully they soon turn to resurrecting Buck Rogers, the mother-lode of pulp. Flash Gordon too…now that the stink from the failed SciFi series has dissappated. But what would be really cool, what would really get the blood flowing (and make all the self-righteous lefty and righty bastards choke on their own bile) would be a FAITHFUL series adaption of John Norman’s Gor stories in all its S&M, masculine, defiantly politically incorrect splendor….
TARL CABOT FOR PRESIDENT!